A fascinating hike to the scenic canyon, which a steep calcareous slopes will satisfy both amateur and experienced mountaineers. Wandering through the surrounding woods and hills, you can enjoy the splendor of the local views of nature – the majestic, beautiful, rich in contrasts, charming landscapes and calmness… Only a wind blows high above… Let yourself be enchanted by the mysterious legends.
The trail takes its dialectal name countless in this area capers (Tappara = capers). As with other trails, hike starts in the center Ulassai, the square in front of city hall, where you can see a map of nearby hiking trails. The stairs, located on the right side, leads to the parish church dedicated to Saint Antiochus. There is kept a priceless work of modern art – The Way of The Cross (Via Crucis).Is is 14 paintings painted by Maria Lai, depict the stations of the Passion. If you decide to visit please contact to the parish priest for a help. He provides you the complete information about the work. 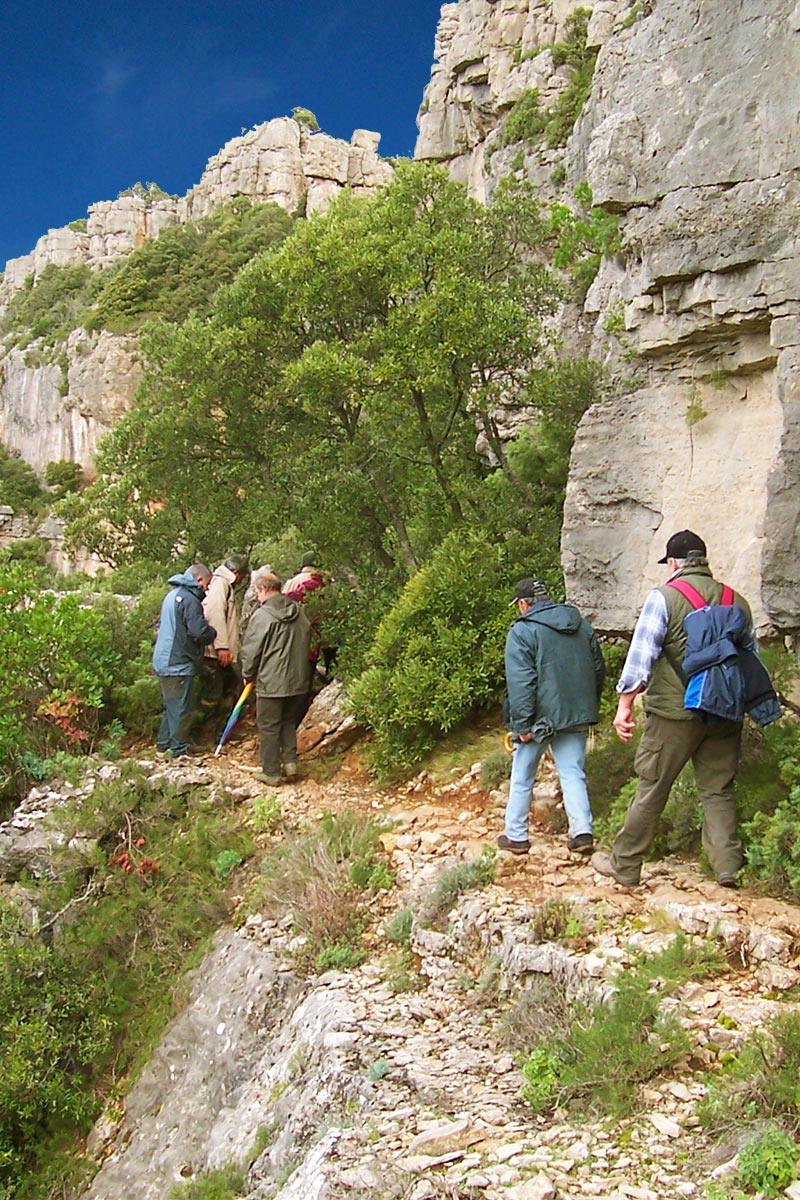 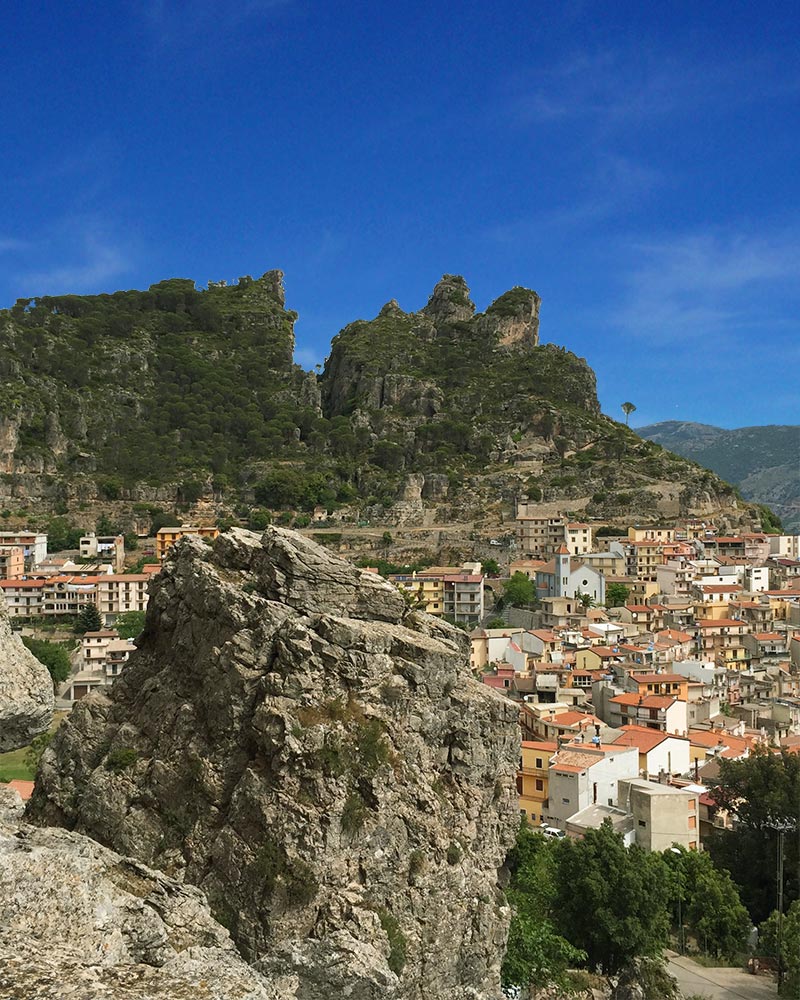 The biggest attraction of the first stage of the journey is undoubtedly the oldest part of town with its old buildings and narrow streets. Following the chosen trial, you can get to the historic bathhouse (so-called Lavatoio): in 1988, stone basins, in which in the past women handwashed underwear, became a part of the open air museum, established by the efforts of prominent artists like Maria Lai, Costantina Nivoli, Guido Strazzy and Luigi Veronesi, who have left their indelible sign here.
To the right of Bath you find the source of refreshing water – one of the most scenic and impressive in the area. Twenty meters away, on the right, climb up the stairs. On the top of them starts a well- marked path .It leads you getting higher and higher … If you look to the right, You will see a huge rock. Nearby is a stone wall built without mortar. In the crack you can see the ruins of an ancient house: a beam of juniper wood, ruins of walls, roof tiles. Here, at the foot of the majestic rocks of an ascetic, an unusual form, once again appeal to you the mysterious spirit of the place.

According to legend, so old how old is this extraordinary region, two very young shepherdess goats, lived in modest hut, have been warned against the danger by the robin with a golden bell suspended from his neck. They came out hearing his melodic, prolonged ringing… and a moment later a huge boulder broke away from the slopes of the mountains and fell straight to a modest hut. Those who climb to the edge of the canyon, even today, will see the Cyclopean stone, and the shepherds tell him that when the wind blows, robin bell still hums.
Just 5 minutes it takes to get at the gate of Sa Tappara – a spectacular canyon with vertical calcareous walls, a deep pass, which is a result of a slight, but consistent movement of the rocks. A narrow tunnel leads into the interior, where you will see one of the newest and most beautiful complexes of climbing walls in Italy. You find there about 100 tracks with different degrees of difficulty. Hiking through the canyon Sa Tappara takes an average of 15 minutes, but a sense of infinite majesty and immensity of what you have the opportunity to savor here, is worth all the hardships. Not to mention the stunning beauty of nature, which reveal in front of you while walking slowly through the pass, and at the outlet. On the right side unfolds a delightful view of the valley of the Pardue River, extending to the coast Cardedu.
Going straight ahead, you get to the junction. Those, who go to the right, return to Ulassai. Turning to the left, enter the path of No 504, dedicated to Mary Lai. So if you want to stay on the chosen at beginning trail, turn right and follow a straight path running highland region. After about 15 minutes it starts to converge downward. You pass through dense pine forest, among the stones, which broke away from the mountain slopes and changed in rocky ridges, creating the beautiful rifts.
This area, known as Marosini, is famous for its extraordinary echo. Marosini is an abbreviation used by local inhabitants, from the name of Maria di Osini- a woman who came to these environs to spin, and slumped from a cliff, wailing piteously, constantly begging for help. Echo repeated the words of travelers who passed that way, by way of Ulassai to Osini.
Trapped for eternity in Ogliastra calcareous cliffs, old woman shows to human eyes once a year, on Midsummer Eve, when the rift dazzles and mysterious song comes out of its heart…
After just 15 minutes you come back to Ulassai. 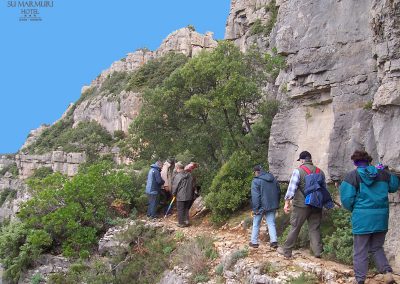 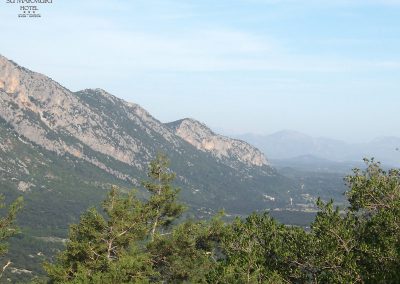 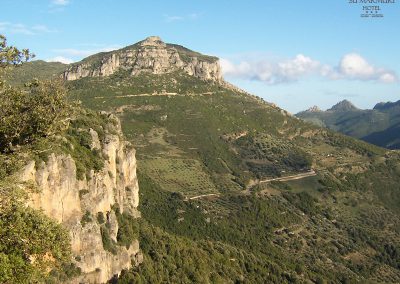 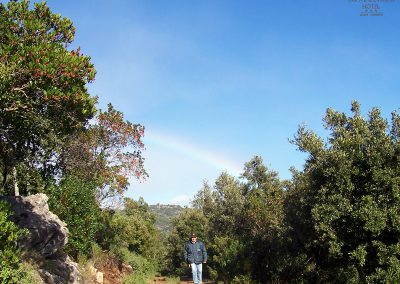 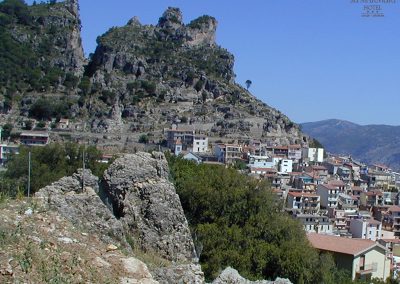 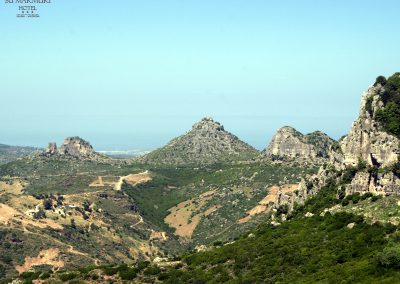 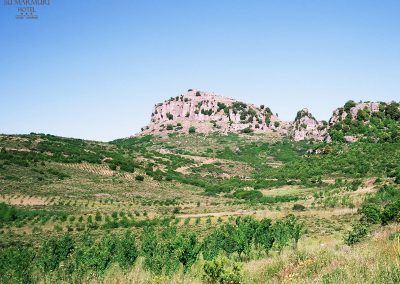 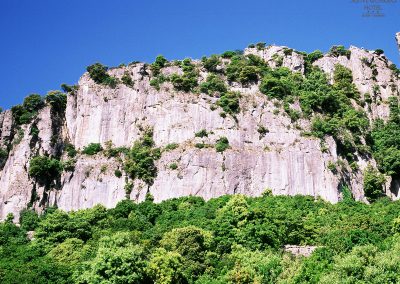